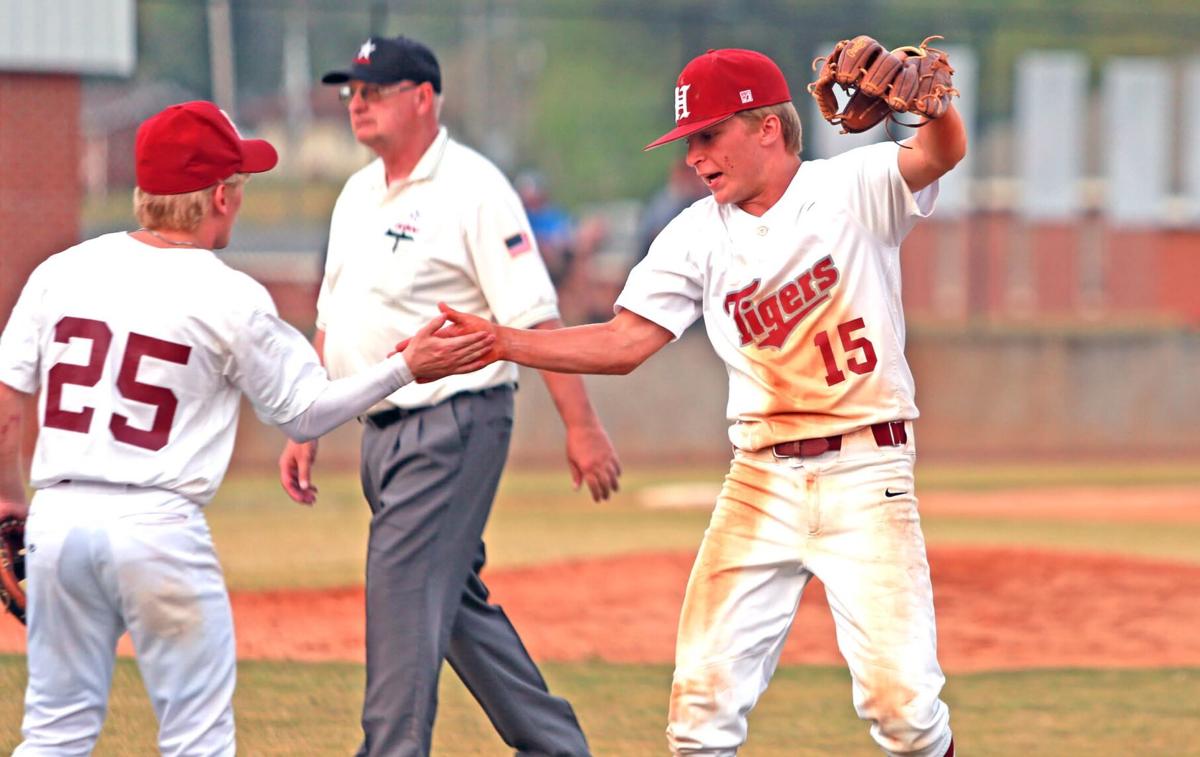 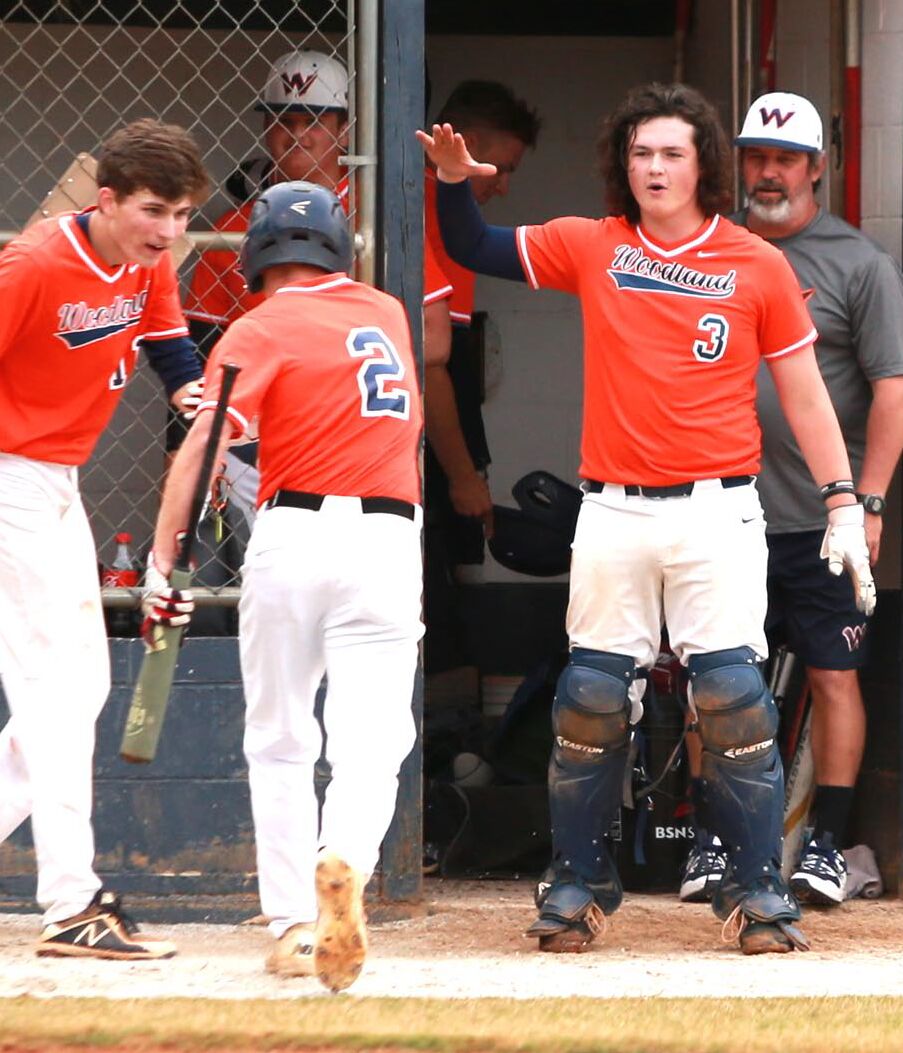 Woodland's Eli Rollins (3) congratulates Mi Bailey (2) as he returns to the dugout after scoring a run in Woodland's area-championship clinching win over Winterboro Friday.

Woodland's Eli Rollins (3) congratulates Mi Bailey (2) as he returns to the dugout after scoring a run in Woodland's area-championship clinching win over Winterboro Friday.

For the team that is used to being in the playoffs and winning area champion­ships, the task of doing those things again required feats that had to be seen to be believed.

For the team that hasn’t been to the playoffs since 2012 the task of winning the first area championship in over a decade was, by com­parison, almost routine.

But regardless of the paths that they took to get there, the Handley Tigers and Woodland Bobcats are area champions. They’ll play their first-round playoff series at home. And they’ll soak up every minute of it after last season ended abruptly due to the begin­ning of the COVID-19 pan­demic.

“It is very satisfying. I thought this group really went into last year with that goal of the playoffs in mind. It’s not a given that we would have been in, but at the point that we were [in the season] their effort might have allowed them to accomplish that. That kind of fed into this year,” said Woodland head coach Lane Gay.

It’s been nine years since Woodland played a postsea­son baseball game. That was also the last time that the Bobcats played at home in the playoffs, when they lost a pair of third-round games to American Christian in the spring of 2012.

“Being able to host round one is huge,” coach Gay said. “Once the playoff picture became a target to us, we did start mentioning that. Just asking the question, ‘How sweet would it be to be able to host that first round here at your home field?’ because it has been so many years since that had been accom­plished.”

Woodland got there thanks to Friday’s 11-1 win over Winterboro. The Bobcats had thumped Winterboro 23-3 in their first game on Tuesday, but Winterboro made things a little more difficult on Friday.

“They came over here and gave us all we could handle,” Gay said.

Woodland led just 1-0 going into the fourth inning, but they scored five runs in the fourth and five more in the fifth to break it open and secure the five-inning victo­ry. Callen Gay and Tate Bradford both went 1-for-2 with a pair of RBI, and Woodland capitalized on 11 walks and five Winterboro errors to fuel their offensive output. That was more than enough for starting pitcher Dalton Bolan, who pitched all five innings and allowed just one unearned run on two hits while striking out 13.

Woodland won’t know who its first-round opponent is until next week. They match up with Area 5, which still has Keith and Central- Hayneville in contention for the top spot. Woodland will host the second place team from that area the weekend of April 23. Specific times and dates for that series have not been set.

While Woodland ended a long playoff drought, Handley continued its impressive playoff streak. By sweeping last week’s series with Munford the Tigers are now in the playoffs for the 12th straight season.

While reaching the post­season has become the norm for the Handley program, this year it was anything but easy.

Handley rode a heroic effort at the plate and in the field from senior Brantley Richardson to a 6-5 win in 10 innings in game one of the Munford series, then watched as he pitched per­haps his best game of the season in game two on Wednesday. Handley won that game 7-0 behind a com­plete-game one-hitter from Richardson, who struck out 11 Munford hitters and did not issue a walk.

That result was ho-hum compared to Tuesday’s dra­matic come-from-behind win.

“That’s probably the best series I’ve ever been a part of right there,” said Handley head coach Tyler Hall, who is in his fifth year with the program. “I enjoyed watch­ing that one. The guys played fantastic. They made some of the best defensive plays I’ve seen in a while.”

Handley jumped out a 2-0 lead in the first inning of Tuesday’s game, and then the bat went cold. For the next five innings they watched as Munford surged ahead to take a 5-2 lead into the seventh.

But that’s when Richardson stepped into his phone booth and came out with an “S” on his chest. Richardson blasted a three-run home run with one out in the seventh to tie the game and send it to extra innings.

The game remained 5-5 until the 10th, when Hayden Daniel scored on a shallow sacrifice fly off the bat of Connor Bickers to give Handley a 6-5 advantage.

The drama was not done, however as Handley needed two outstanding defensive plays in the bottom of the 10th to preserve that lead.

The first came from Richardson who cut down a runner trying to advance from first to third on a base hit and threw him out at third base.

“About 270 feet away, he just throws a missile. It didn’t even bounce,” Hall said.

Then for the final out, Bickers made his contribu­tion to the heroics with a diving catch on a fly ball in left center field, leaving the potential tying run stranded at second base.

“Connor just runs out of nowhere and lays flat out, dives and ends the game catching that fly ball that could have possibly tied the game,” Hall said.

Richardson finished the first game 4-for-5 with a double and five RBI. He is one of five seniors on this Handley team, and he has committed to play at Southern Union next season. And Hall said his perfor­mance throughout the series was crucial to Handley’s ability to come away with the three-game sweep.

“He’s playing up to the capabilities that this team and us coaches fully expect­ed of him. He waited until a great time to showcase it. He was instrumental in that series and played the best ball, I believe, of his career,” Hall said.

Garrett Calhoun and Ty Fetner had three hits and two RBI apiece in the game two win, with Fetner com­ing just inches short of a home run on an RBI double in the fourth.

And Handley won easily in game three, 12-1, in which another senior, Allen Exum went 3-for-3 with four RBI in a 12-hit attack.

Handley will host Montevallo in the first round of the playoffs next week.