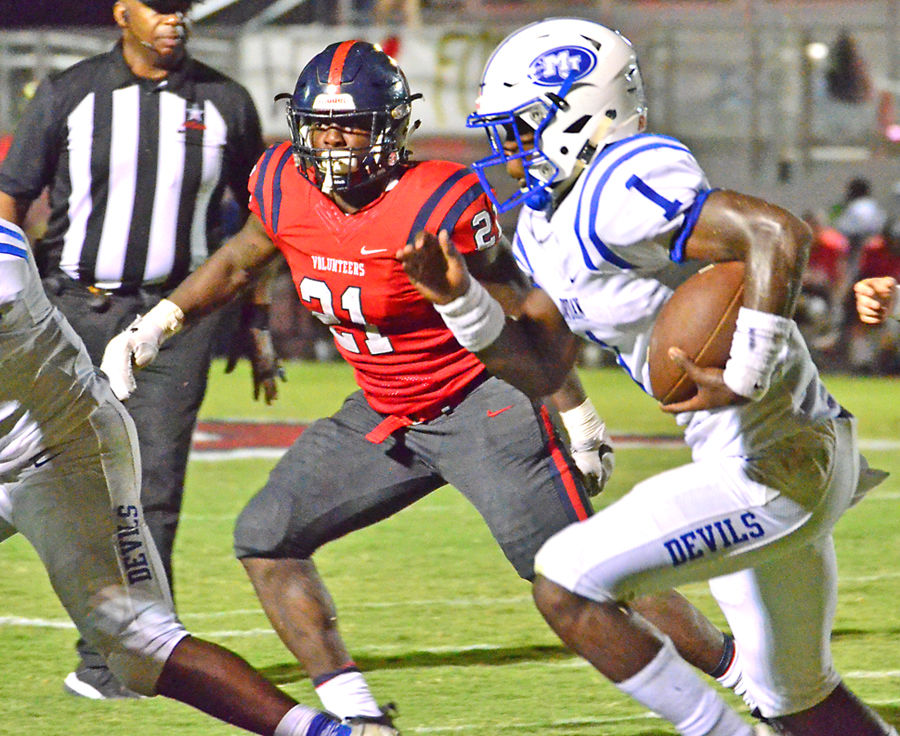 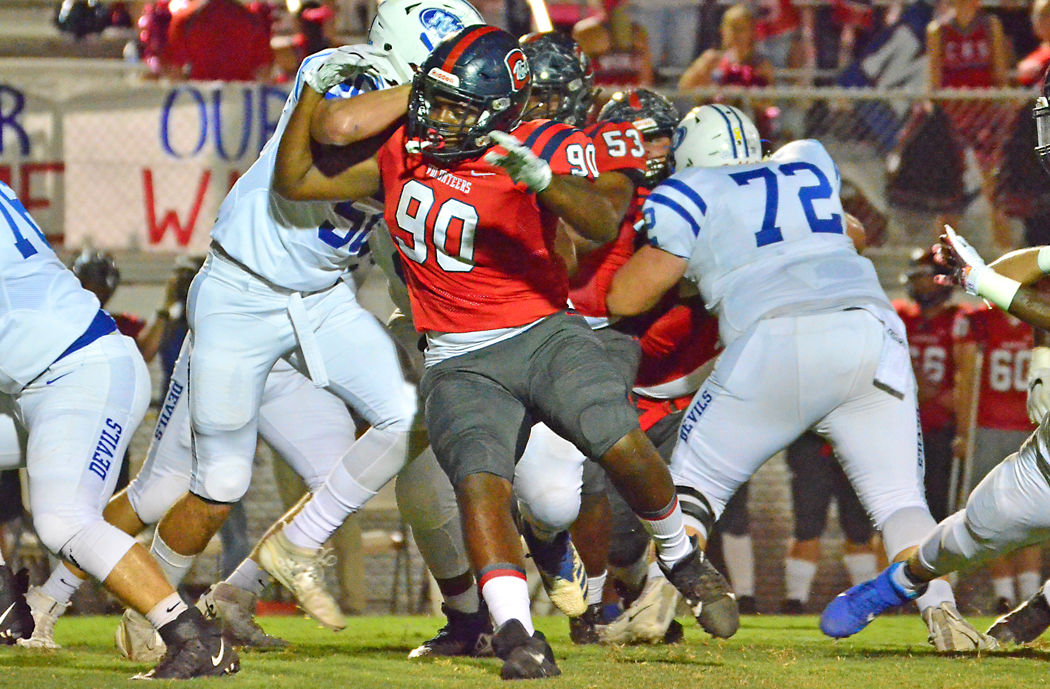 Central defensive lineman Davion Phillips (90) tries to fight through a block in the first half of his team's 34-28 loss to Mortimer Jordan Friday in Lineville.

Central defensive lineman Davion Phillips (90) tries to fight through a block in the first half of his team's 34-28 loss to Mortimer Jordan Friday in Lineville.

If Central head coach Danny Horn has a sleepless night tonight it will probably be because Kourtlan Marsh won't stop running through his head.

The senior quarterback from Mortimer Jordan accounted for all five of his team's touchdowns, and Central couldn't keep pace as the Volunteers fell 34-28 at home Friday.

Marsh was a problem all night for Central. He rushed for 154 yards and four touchdowns on 31 carries and completed 13-of-18 passes for 205 yards and another score.

He saved his most damaging work for a torrid 8-minute stretch in the second half that was the ultimate difference in the game.

Central's offense just wasn't clicking for most of the night, but the Vols still managed to take a 14-13 lead after Elisha McNeil took the opening kickoff of the second half 92 yards for a touchdown.

But that's when Marsh put his team on the march. He orchestrated an 80-yard touchdown drive on which he ran or passed on 11 of the drive's 13 plays, punctuated by his 3-yard run to the pylon that put the Blue Devils ahead 20-13.

Central then missed a golden opportunity to reclaim the lead when they failed to connect on a wide open fourth down pass deep in Jordan territory.

The Blue Devils took over after the turnover on downs, and three plays later March hit Garrison McCleney for an 84-yard touchdown that stretched the lead to 27-14.

The clincher came after the Blue Devils forced Central three-and-out on its next possession. On the first play of the fourth quarter Marsh ran a devious play fake that left Harrison O'Brien wide open in the middle of the field. Marsh hit him in stride for a 52-yard gain that gave Mortimer Jordan first-and-goal at the 1-yard line. Marsh then dove across the goal line for a 34-14 Blue Devil advantage.

Central finally got its offense in gear in the fourth quarter as quarterback Boyd Ogles orchestrated two quick touchdown drives that made the Blue Devils sweat at little bit late. But the Blue Devils recovered Central's onside kick attempt with 3:20 left in the game and ran out the clock for the win.

Ogles finished 17-for-32 for 219 yards and a touchdown, while also throwing his first interception of the season. That came on a last second prayer in the end zone at the end of the first half.

Javon Wood caught four passes for 91 yards and a score, and Quentin Knight rushed for 81 yards and a touchdown on 19 carries to pace the Central offense.

Cam Simmons got Central on the board early in the first quarter when he picked up a Mortimer Jordan fumble and raced 15 yards into the end zone for a 7-0 Central lead.

Central has now lost two straight after starting the season 3-0. The Vols will return to action next week on the road at St. Clair County.

Devontae Houston had 197 yards and four touchdowns on just 10 carries, and Handley crushed Elmore County 42-14 to go to 3-0 in region play. Handley has a pivotal region matchup with fellow region unbeaten Lincoln next week in Roanoke.