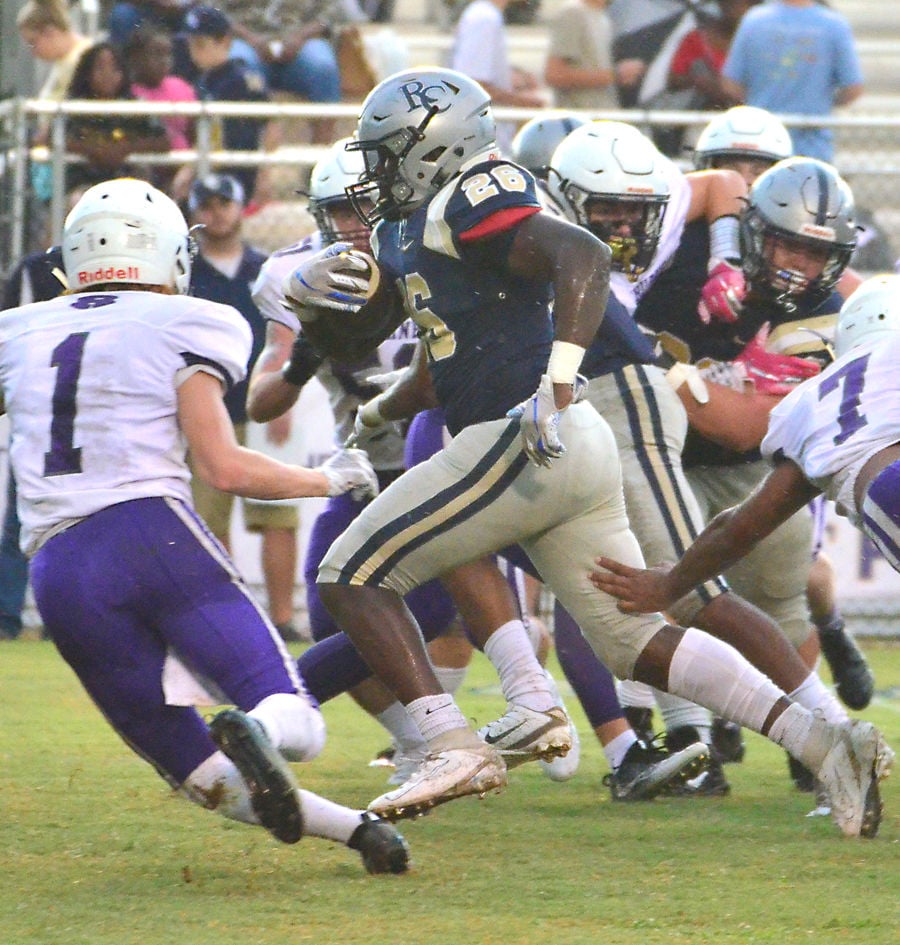 RCHS running back Johnathan Prothro finds some space to run in the first quarter of his team's jamboree against Ranburne Friday in Wedowee. 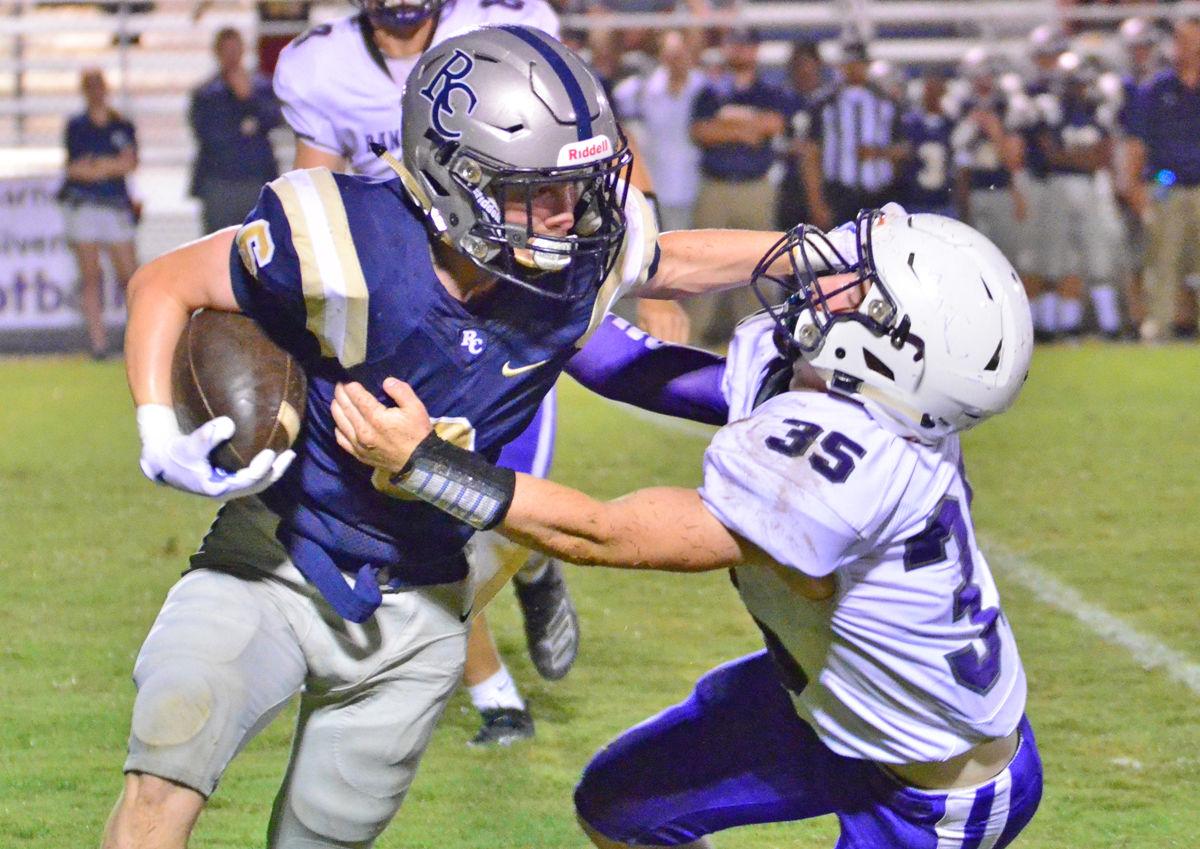 RCHS running back Johnathan Prothro finds some space to run in the first quarter of his team's jamboree against Ranburne Friday in Wedowee.

RCHS emerged as the night’s big winner from Friday’s three-team jamboree in Wedowee. The host Tigers bested both Ranburne and Wadley for a half, while Wadley picked up a win over Ranburne, which finished 0-2 for the night.

RCHS opened the night with a 13-0 win over Ranburne in the jamboree’s first two quarters.

The Tigers held the Bulldogs to minus-12 total rushing yards and withstood just one serious scoring threat. That came in the second quarter when Ranburne quarterback Ben Jackson found a connection with receiver Trace McMahan. The two hooked up for three completions for 68 yards to give Ranburne a first-and-goal at the RCHS 3-yard line.

But a bad shotgun snap and two RCHS sacks by Demarcous Woodgett and Joshua Holloway pushed Ranburne all the way back to the 29-yard line and ended the threat.

That stop preserved RCHS’s 13-0 lead, which came thanks to short runs by Johnathan Prothro and Dante Jordan.

Both scoring drives began with excellent field position. Prothro’s 2-yard run ended a 30-yard drive after a short Ranburne punt, and Jordan’s 1-yard dive over the top to start the second quarter came after Jordan had intercepted Jackson and put RCHS on the Ranburne 26-yard line.

“It’s a lot of things,” Bailey said. “Obviously, the offensive line, we’ve got a long ways to go. We’ve got to be able to move somebody. I don’t think we moved anybody all night long. There’s still some assignment problems out of the backfield as far as picking up blocks and making the edge blocks. And I think we hit the hole slow tonight too. It’s not one particular thing. It’s everything. Pass protection was good at times and we didn’t get it out of our hands. Sometimes it wasn’t good and we couldn’t get it out of our hand. It’s not one single thing. We’ve just got a lot of work to do and long way to go before we get there.”

Those struggles continued into Ranburne’s second half, which ended in a 6-0 loss to Wadley.

Ranburne found a little more traction in the ground game as Gunner Hollis had a 19-yard run to start the game, and Hunter Hollis ripped off a 72-yard dash before Jonathan Poole tracked him down from behind to stop him at 2-yard line.

Once again Ranburne was unable to capitalize on that scoring opportunity as the threat ended with a Poole interception in the end zone.

Wadley scored the only touchdown of the half on a 1-yard run by quarterback Jacob Marable. Marable, who was getting his first start as a varsity quarterback, completed two big passes during the drive to set up his short run.

The first came on a 31-yard play to Sebastian Owens, and the second was a 19-yard completion to Poole near the goal line on a 3rd-and-11 play from the 22-yard line.

Wadley head coach Shenan Motley liked what he saw from his quarterback and his receiver.

“You saw it tonight, the range that Poole’s got. He got a little banged up later on in that game. But if he wants to, he can go get the ball,” Motley said. “And Marable, man, he made some great passes tonight. He impressed me. He’s the type of kid, he works on his stuff beyond practice, and I can see it. And sometimes that’s what it takes. If you want to be successful you’ve got to work on things beyond just what somebody makes you do.”

The final matchup of the night between RCHS and Wadley had all the earmarks of a typical preseason contest. Both teams struggled with fumbles and penalties, but RCHS came away with a 14-6 win.

The first two touchdowns of the game came as a result of costly mistakes by the other team. Wadley opened the matchup with its longest play of the night, a 54-yard run by Caden Messer that gave Wadley a first down on the RCHS 21-yard line.

But Wadley fumbled on the very next play, and Damarcus Davis gathered up the loose ball and ran 82-yards untouched to the end zone for a 7-0 RCHS lead.

“We had an opportunity down here to punch one in, and we fumble the ball,” Motley said. “And I haven’t worked on that, just fumble drills, with my running backs that much at practice. And I notice right now that’s something we’ve got to work on. Little things like that that will change the game all the way around.”

Wadley got a chance to pull even early in the second quarter when RCHS was flagged for a horse-collar tackle on what would have been a fourth-down stop deep in its own territory. The result of the penalty gave Wadley a first-and-goal from the 7-yard line, and two plays later Marable found some running room on the outside and scored from six yards out.

The last score came after a 5-play comedy of errors by both teams late in the contest.

RCHS mishandled a handoff on the Wadley 19-yard line, and Wadley recovered. On the Bulldogs’ first play of the ensuing possession they fumbled the ball right back to RCHS.

Wadley was then flagged for a substitution penalty before RCHS fumbled again but recovered to maintain possession, then the Tigers were flagged for an illegal procedure penalty prior to the next play.

When they finally got a clean snap, Dante Jordan took the handoff and dashed 14 yards for a touchdown and a game-icing 14-6 lead.

Jordan had a big night as he finished with nine carries and game-high 72 yards and two touchdowns to go along with his interception on defense.

Wadley will travel to Woodland for its season opener Friday. RCHS hosts Notasulga, while Ranburne will play at Glencoe.

Five in a row