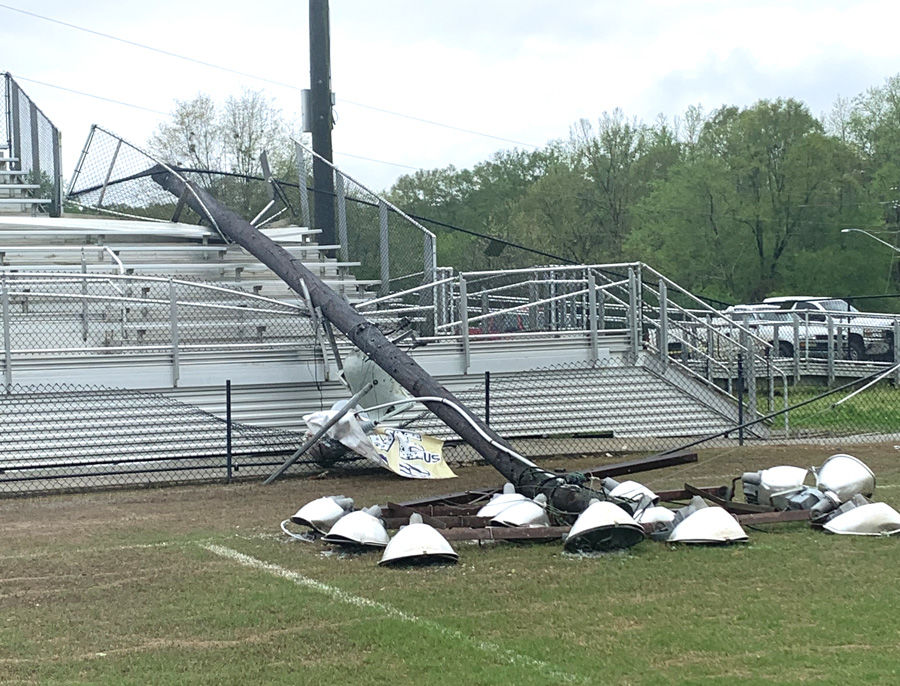 A light pole at Hulond Humphries Stadium in Wedowee snapped near its base and fell onto the home-side bleachers after high winds swept through the area Tuesday. 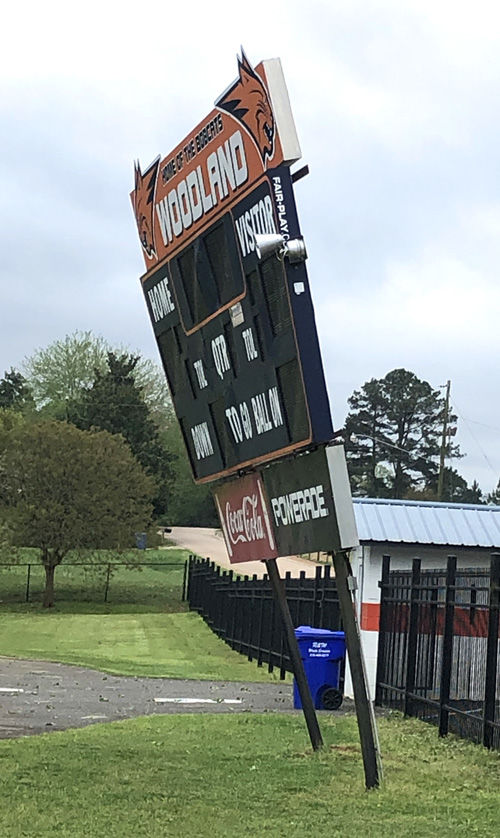 The scoreboard at Woodland's Warren Sewell Field was knocked off kilter by storms that swept through the area Tuesday.

A light pole at Hulond Humphries Stadium in Wedowee snapped near its base and fell onto the home-side bleachers after high winds swept through the area Tuesday.

The scoreboard at Woodland's Warren Sewell Field was knocked off kilter by storms that swept through the area Tuesday.

Hulond Humphries Stadium on the RCHS campus in Wedowee sustained the most extensive damage after one of the light poles snapped near the base and fell onto the home side seating area.

“You think about it, a sporting event, a football game, if it was fall and a storm came in like that and blew it over during a game before everybody could get out, we’re just blessed and lucky that there was nothing going on like that,” said RCHS athletic director and head football coach Pat Prestridge.

“It crushed the lights that were on top, so we’re going to have to get whole new lights,” Prestridge said. “It was beside the fence on the outside of the stadium, so when it snapped off at the bottom it kicked up the fence there too.”

The broken pole was one of three light structures that sustained damage at the stadium Tuesday. Two other poles remained upright, but the lighting apparatuses at the top were twisted around due to the strong winds.

“The lights at the top are just twisted around on the frame on the pole,” Prestridge said. “They’re probably going to have to go back and drill new holes in there and re-frame them on the poles.”

Prestridge said the school’s insurance should cover most of the repairs, but he was unsure when those repairs would take place due to travel and work limitations imposed by the state for coronavirus prevention.

He was confident that the stadium would be ready for play if and when football activities resume in the summer.

Woodland’s Warren Sewell Field also sustained minor damage from the storms when the field’s primary scoreboard was knocked off balance and nearly toppled.

The scoreboard sits on the west side of the field near the main entrance and is supported by two metal poles. Those poles bent under the force of the wind causing the scoreboard to lurch forward.

“The ground was so soft from the rains that it almost pulled the poles from ground,” Gay said. “So that’s why the scoreboard is leaning.”

The scoreboard itself appeared to still be functional, but those support poles will probably have to be replaced.