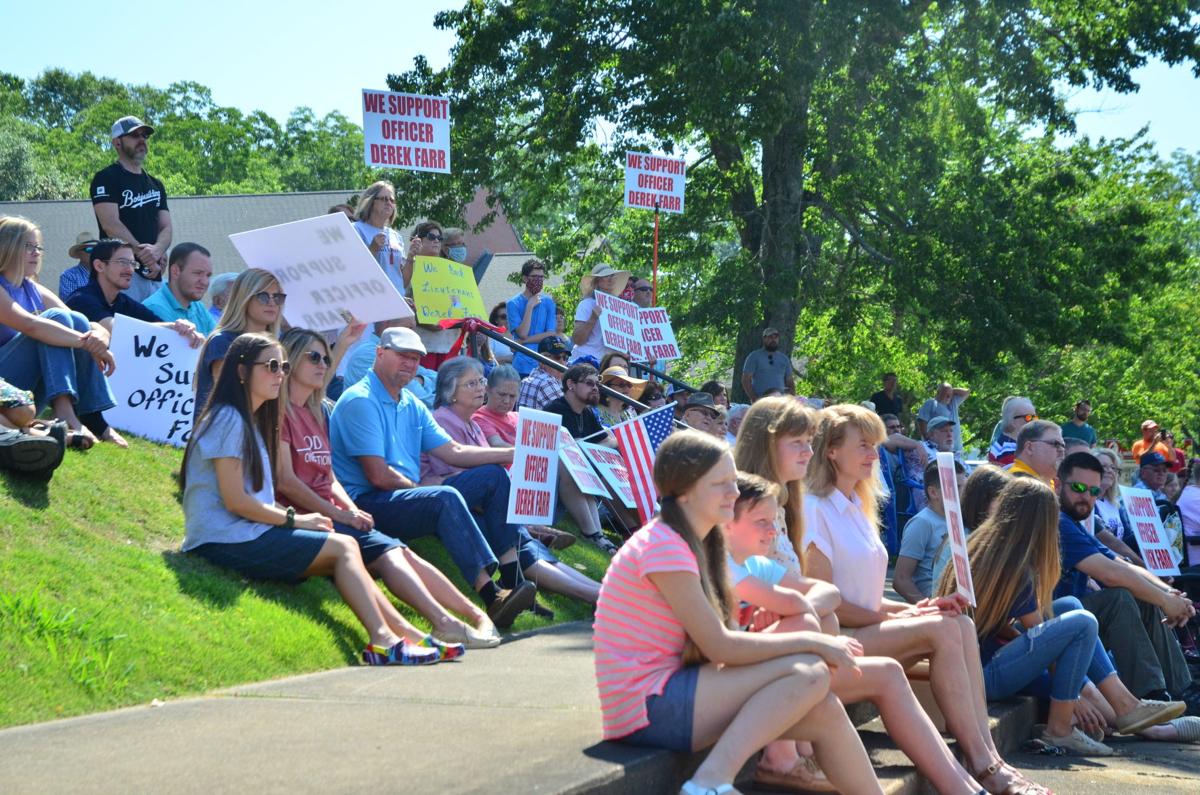 Advocates for Roanoke Officer Derek Farr gathered in front of Roanoke City Hall on Saturday morning to show their support.

Advocates for Roanoke Officer Derek Farr gathered in front of Roanoke City Hall on Saturday morning to show their support.

Derek Farr's job status with the Roanoke Police Department will be determined at a closed hearing in a called meeting of Roanoke City Council July 9. That hearing was originally scheduled to take place this Thursday, but Farr has reportedly hired legal representation and was granted a two-week continuance in order for his legal counsel to familiarize themselves with the case.

The hearing with the council will be the final step in the punitive process for Farr, who found himself under investigation over two weeks ago when comments he made in a Facebook post were called into question.

Farr, who is currently the police department's lieutenant in charge of day-shift patrol, is reportedly facing a two-week suspension without pay and a demotion in rank and pay as a result of the incident. He has been on paid administrative leave since his remarks first came under investigation earlier this month.

Members of the community rallied in support of Farr Saturday morning in front of Roanoke City Hall. The gathering drew over 100 people with many of them sitting on the lawn in front of the Methodist church across the street from city hall, holding signs that read "We support officer Derek Farr."

The controversy began with a post Farr made on his personal Facebook page that read, "Protesting? Yea right! More like thugs being thugs. It's kind of hard to get people to believe you're living in fear. Just saying..."

The post was made as riots flared around the country amid the protest of the death of George Floyd at the hands of a Minneapolis police officer.

The point of contention centered around Farr's use of the word "thugs" and the negative racial connotation toward black people the word has garnered in recent years. As a result of the post, the Randolph County chapter of the NAACP circulated a petition seeking Farr's removal from his position of authority in the Roanoke Police Department. Representatives from the local NAACP also met with Roanoke City Council as part of the June 8 council meeting.

According to organizers, Saturday's rally was an attempt to provide a public platform for those who believe Farr has been treated unfairly.

Jill Hicks, who attends church with Farr, was instrumental in putting together Saturday's rally.

"I just feel like he has protected and served our community for over 30 years, and I feel like it was time for us to give back that support," Hicks said. "His post was not racially motivated, and it was not targeting a race of people. It was targeting the people that were vandalizing other people's property."

Farr, who is also a county commissioner, responded late Tuesday to a request for comment.

"All I can say right now is I asked for a public hearing, but I was denied," he said. "It will be an executive session hearing. I can't comment on anything else at this time."

"Your support and your prayers have been felt," he wrote.